How CHRONEXT improved conversion up to 32% with Frontastic

With Frontastic as their Commerce Frontend Platofrm, CHRONEXT switched from a rigid and difficult to use monolithic architecture to a flexible, modern shop solution. 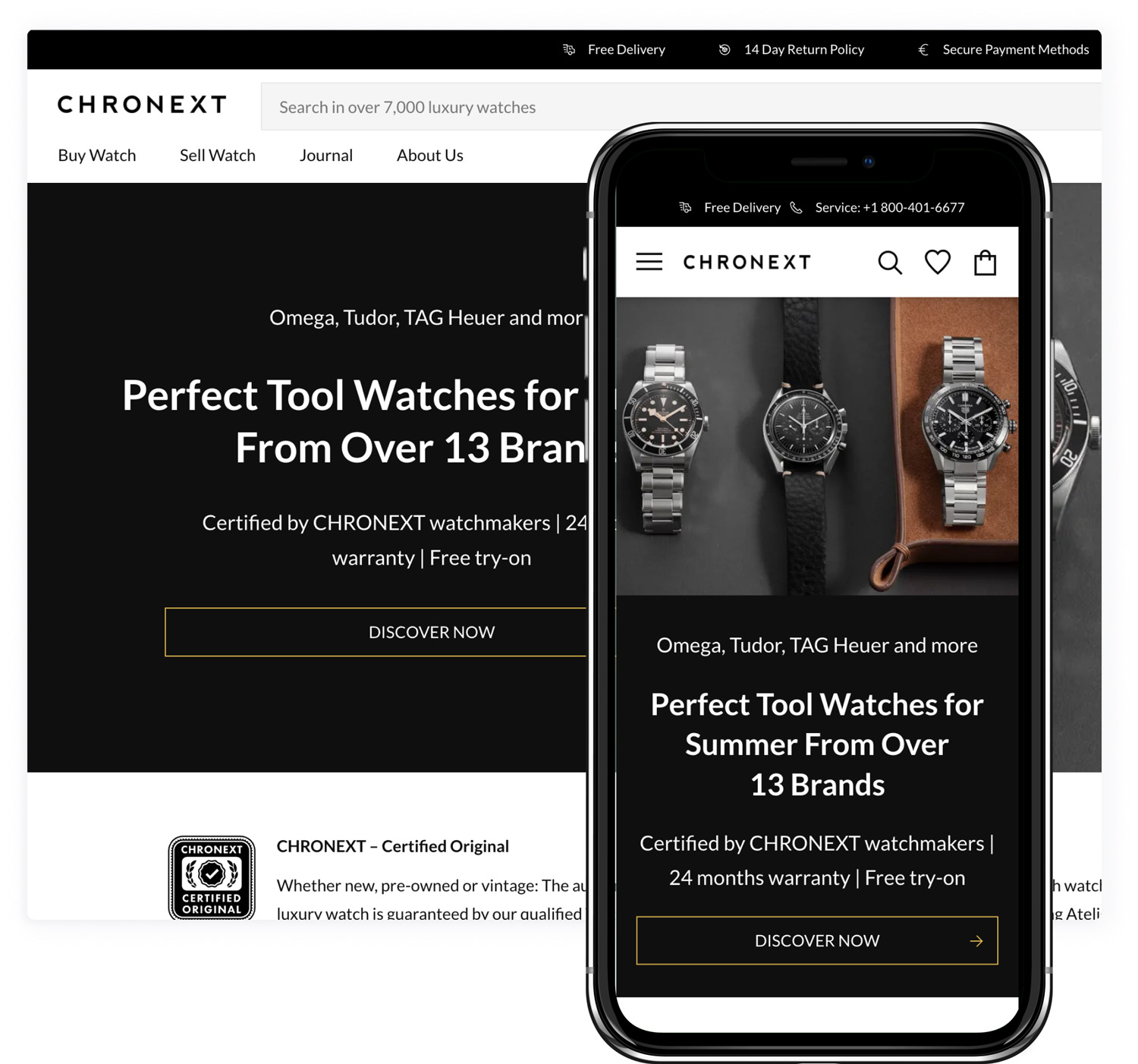 CHRONEXT is a global marketplace for buying and selling luxury watches. The platform with guided customer service ensures that you are able to find the perfect watch for you through our wide selection of over 7,000 models.

When the platform for luxury watches, CHRONEXT, launched in 2015, it was structured in the same way as all online stores were structured at that time. As a monolith, the store had a frontend, a very reduced CMS, backend interfaces to Business Intelligence, ERP, supply chain, PIM, and sales as well as functions for store controlling.

“People at Frontastic have done the impossible and fulfilled most of our requirements on time. We’re definitely better off with Frontastic than without”

It was ok to launch this way, but over time CHRONEXT noticed that it became more and more difficult to change or expand elements, integrate new ones, and even operate the entire store. The result was high operating and opportunity costs. To try and improve things, CHRONEXT introduced a microservices layer on top of its monolith in 2018. It made integrations with other systems easier but only partially alleviated its problems. Every change to the store remained cumbersome, and the store as a whole was difficult to operate.

In 2019, CHRONEXT decided to redesign the entire store. The goals were clear: refresh the design, improve conversion, and, most importantly, the platform should be easier to change and operate for all CHRONEXT teams. Emanuel Schleussinger was brought on board as CTO and would be responsible for the website relaunch project. To start, the new Head of Technology checked the needs and requirements of each department. Then he brought 100% of the IT, which had been partially outsourced to an agency, back into the company, and formed an IT team of 10 that was to invest 70% of its capacity in the new store project. Then he had to decide if he was going to build the frontend from scratch or build on top of a Commerce Frontend Platform. 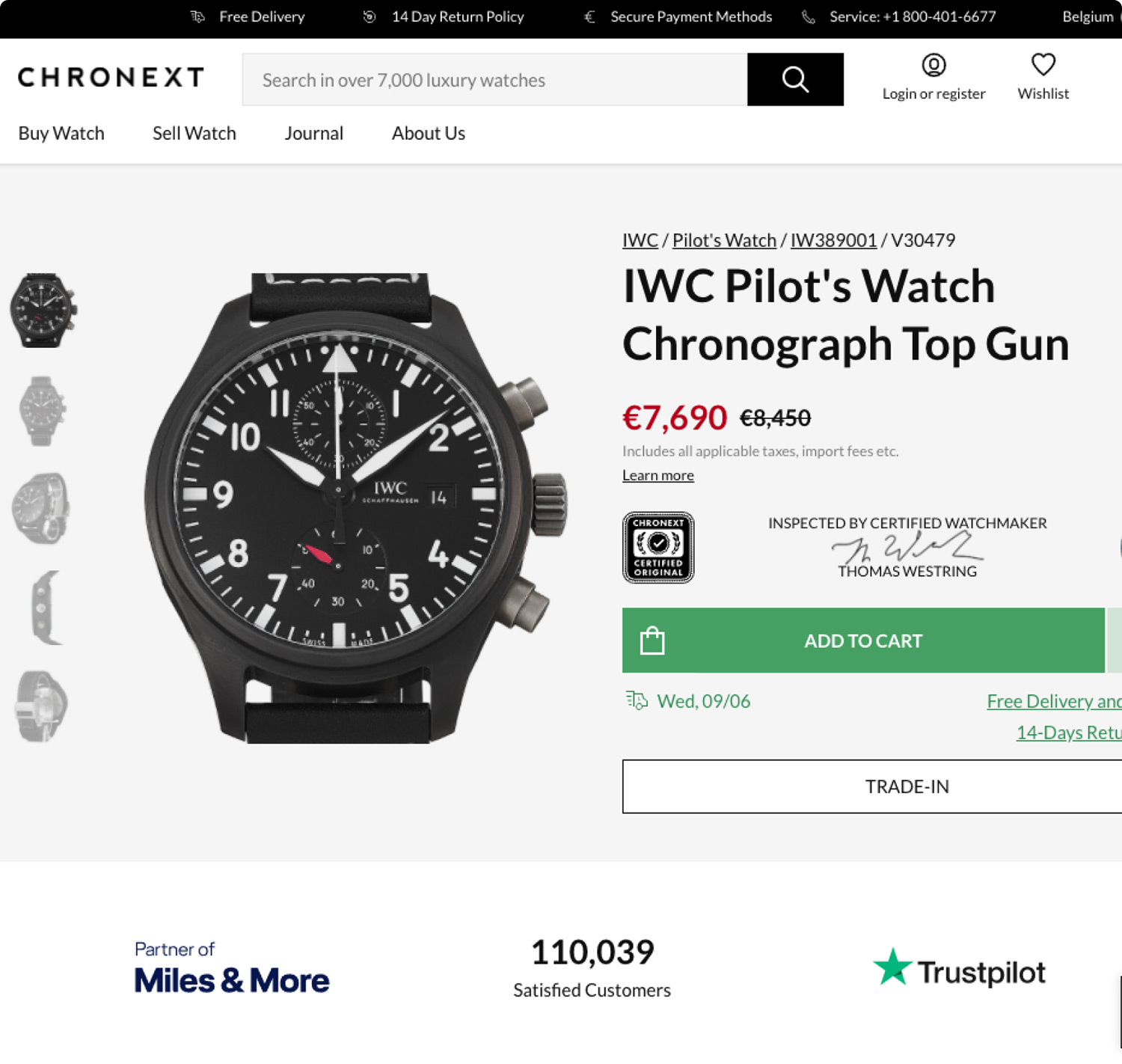 “If we had built such a solution ourselves, it would have cost us person-years.”

A leap of faith pays off

To get an amazing search functionality would take years to be on the same level as a company whose only focus is search, and CHRONEXT had other features to work on. “Building your own stuff is sometimes liberating, but it’s usually the slow way,” says the CTO. Emanuel knew that it didn’t need full control of their code, or all the flexibility in the world, “we just wanted to have a kickass watch shop quickly and at a low cost with no additional complexity.” So CHRONEXT decided to mix and match the services it would buy as it was the fastest way.

For its technical infrastructure, CHRONEXT chose to buy its frontend from the Commerce Frontend Platform Frontastic, the store software from commercetools, the CMS from Contentful, and the payment solution from Adyen. “We were faced with a difficult decision back then,” recalls Schleussinger. “The Frontastic technology was promising, but at a very early stage of development. But once we met with them, even though the team was very small, they were all experts. They had lots of experience in the B2C industry. They were also truly shining passionate creators who wanted to ship something special, something at the forefront of technology. And because the finished product would meet our needs so perfectly, we were willing to take the risk,” says the CTO.

Frontastic scored points with various features such as :

The CTO and his team of developers had reservations when it came to platform stability and developer friendliness, rendering speed, and the lack of world-class references. But the team believed Frontastic was likely to build a remarkable system, even if the start will be rocky.

In May 2019, the CTO created a 6-month plan where CHRONEXT would move from its monolith architecture to a fully microservices one but be able to run both versions at the same time. It meant that the new world would connect to the services in the same way as the monolith, which allowed CHRONEXT to phase the rollout of its different stores. The new shop had to do exactly what the old shop could do, plus a refreshed mobile first design, custom-made checkout, more payment options, and so much more.

By August 2019, the teams had a working site that used the Frontastic studio, and by October 2019, the Austrian site was launched on the new workflow to get an initial glimpse of how it would perform. The CTO believed that they could now launch new sites so much quicker with this new technology, and now he could put it to the test. In November 2019, the team did just that. The French version of the CHRONEXT site was built from scratch and released in just 4 weeks. It included a new language, a new locale, new payment options, and everything else that goes with it. Then CHRONEXT did the same in December 2019 with the Australian version. .com relaunched in March 2020, then both the UK and Switzerland followed in April 2020. By this stage, only the German version of the site was left to launch. It’s CHRONEXT’s biggest market, so it was vital the rollout was smooth. In May 2020, the .de site relaunched, and it immediately had a better conversion.

By July 2020, the 8-month phased rollout allowed CHRONEXT to improve site performance, optimize conversion, enhance SEO, and many more things. So by the time it launched the .de site, there were very few post-launch issues and meant the team could focus on new features and more improvements. In August 2020, CHRONEXT switched off the old monolith system and hasn’t looked back.

Buying was the right decision

Almost every piece of content on the page can be changed by individual departments, from product detail pages to SEO content or even content on the checkout pages. The CHRONEXT business users don’t have to go to IT to make changes to the site, they can do it themselves. So both teams save time and can focus on improving the user experience with significantly faster delivery of new features. CHRONEXT has seen buying conversion has increased by more than 10% since relaunch which has totally exceeded expectations.

So the hopes of the CTO have been fulfilled, but what about his initial concerns about Frontastic? “The Frontastic team has achieved the impossible and fulfilled most of our requirements on time,” praises CHRONEXT CTO Emanuel Schleussinger, “and it’s already a better product than it was a year ago.” The Head of Technology now knows for sure, “we’re definitely better off with Frontastic than without.”

“The Frontastic team has achieved the impossible and fulfilled most of our requirements on time, and it’s already a better product than it was a year ago, we’re definitely better off with Frontastic than without.”

Focus on improving the user experience

As one of the biggest retail platforms of luxury watches, CHRONEXT needed to be able to quickly and easily change various elements of its online shop. With a Monolithic architecture, it was impossible to make these updates without needing multiple teams to do the work, costing them valuable time and money. CHRONEXT results are very impressive:

Frontastic was the right solution for CHRONEXT because it meant that they could change to a Microservices architecture where they could utilize multiple systems, with Frontastic powering the frontend delivered as an impressive PWA. It also empowered all their teams to be able to work with fewer dependencies on each other and allowed them to focus on their specialized roles within CHRONEXT, giving them the flexibility to change and adapt to any future needs. 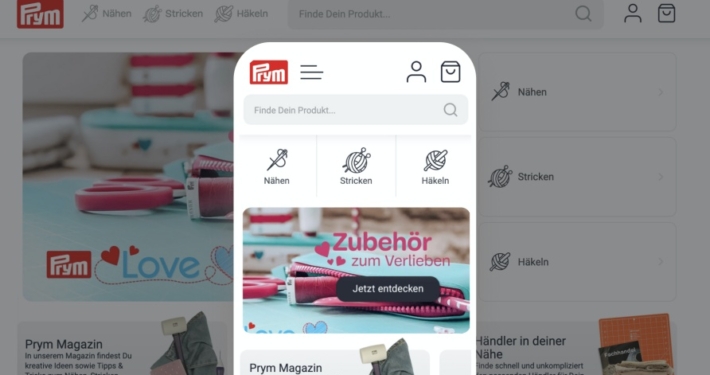 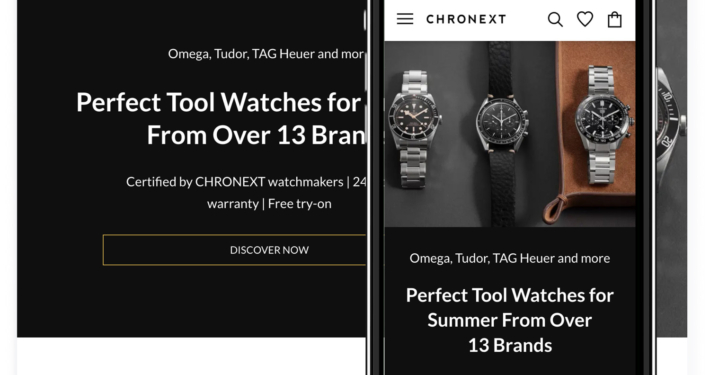 Take a guided tour to discover Frontastic for yourself.